It is strange that Christians would identify Jesus as “the God-man” based only on a single biblical text, it being 1 Timothy 2:5. Instead, this passage suggests that Jesus is not a dual being. For it clearly:- (1) distinguishes God and Christ Jesus, (2) affirms that God is a single Person, (3) calls Christ Jesus only a “man,” and (4) therefore neither calls him “God” nor a “God-man.”

Colossians 1:16 is a misleading text in standard bible versions. Colossians 1:16 in the King James (Authorized) version of the Bible is likely to be misleading. It reads: “By him [Jesus] were all things created that are on the earth, visible and invisible, whether they be thrones or dominions or principalities or powers. All things … END_OF_DOCUMENT_TOKEN_TO_BE_REPLACED

by Servetus the Evangelical aka Kermit Zarley When the risen Jesus appeared to his gathered disciples on the first Easter evening, the Apostle Thomas was not present (John 20:19-24). The disciples later told him they had seen Jesus. Thomas said he would not believe unless he saw Jesus for himself (v. 25). One week later … END_OF_DOCUMENT_TOKEN_TO_BE_REPLACED

by Servetus the Evangelical Jesus of Nazareth is the most famous man who ever lived. But who was He? To learn about His identity we must turn to the Bible. The New Testament presents Jesus as a seer-prophet, a teaching rabbi, an itinerant preacher, a wisdom sage, a charismatic healer, a miracle worker, and an … END_OF_DOCUMENT_TOKEN_TO_BE_REPLACED

In conclusion, the arguments are about evenly divided for either variant. But the following point is decisive: if John 1:1c, 5:18, 10:30-38, and 20:28 are interpreted as not calling Jesus theos (“God”), then John 1:18 cannot be linked to any corresponding text in this gospel. And linkage is the prologue’s purpose. Since ho monogenes huios clearly links to John 3:16,18 to the authentic Greek text of John 1:18 most likely is not monogenes theos but ho monogenes huios, so that it does not call Jesus “God.”

In summary, the Granville Sharp Rule used to argue 2 Peter 1:1 is a statement of the deity of Jesus is invalid. This grammatical rule was “discovered” rather late by a well-intentioned Christian who was specifically looking for grammatical patterns that would “prove” the deity of Christ. His “discovery” was self-serving and self-validating.

ROMANS 9:5 does not call Jesus “God.” Instead, it is a declaration of praise to God offered immediately before Paul’s question, had the Word of God failed? It affirmed that Paul did not doubt even for an instance that God’s word had not failed. His faith in God was absolute. The clause is a standalone statement not grammatically dependent on the preceding sentence. The translation found in the NIV inserts a relative pronoun where there is none. Since ROMANS 9:5 is not a clear statement about the deity of Christ, since there is no reason in this context to make such a statement, and since Paul elsewhere does not explicitly state that Jesus is God, the burden of proof for the claim that the Apostle Paul taught the deity of Jesus remains on those who make it.

Philippians 2:5-11 is not Paul’s attempt to explain the “Incarnation” or how a divine being divested himself of his divine prerogatives. It is not an exposition about the preexistence of Christ. Instead Paul uses a real life example from the life of Jesus to illustrate his appeal for humility and mutual submission. To help fill out his illustration Paul brings in language and imagery from the Old Testament accounts of Adam and the “Suffering Servant” of Isaiah. He does this to contrast the way of self-promotion (Adam) with the path of humble obedience and suffering (the “Suffering Servant”). 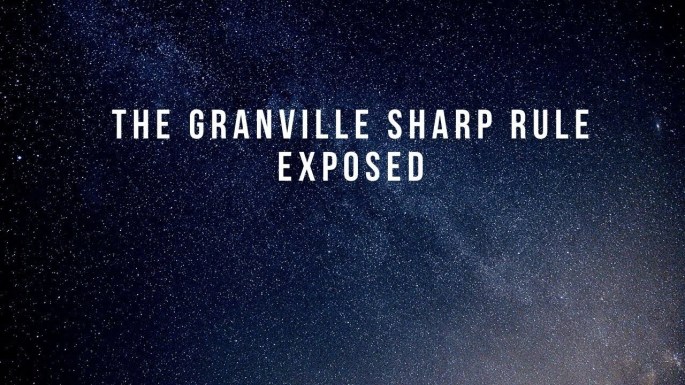 Mr. Sharp specifically applied this rule to eight verses purported to prove the deity of Christ including Titus 2:13 and he cited them to demonstrate his Rule’s validity. Since Mr. Sharp undertook his venture with the specific intent to find characteristics of Greek that prove the deity of Jesus, his Rule must be evaluated with some degree of skepticism. His “discovery” is self-validating. Further, it is based to some extent on circular reasoning since he started with the goal of finding grammatical rules to prove what he already assumed to be true.