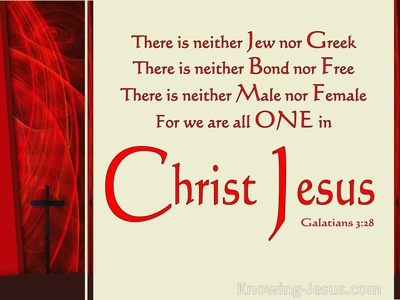 The notion has long been prevalent in sectarian circles (and is growing in the church of the Lord) that there are no sexual distinctions to be observed in Christ. The claim is made that Paul, in Galatians 3:28, abolished sexual differences so that men and women may function in identical capacities in public church activity—preaching, leading prayers, perhaps even serving as elders, etc. Such a theory is at variance with the New Testament for the following reasons.

First, it ignores the context of Galatians 3:28. In this portion of Scripture, the apostle is dealing with sexual equality in the matter of salvation; but, as Professor Colin Brown observes, :-

Paul’s statement is not a call to abolish all earthly relationships. Rather, it puts earthly relationships in the perspective of salvation history. As Paul goes on to say, “And if you are Christ’s then you are Abraham’s offspring, heirs according to promise” (Galatians 3:29). All who are in Christ have the same salvation status before God; but they do not necessarily have the same function (1976, 570).

The fact that Paul later instructs servants to be obedient to their masters (Ephesians 6:5ff), in spite of the fact that Galatians 3:28 says there is “neither bond nor free” in Christ, is in itself a refutation of the theory under consideration.

Second, Paul himself was unaware that his teaching abolished sexual roles, for when he wrote 1 Timothy 2, which was penned later than Galatians, he limited the public service of women.

The New Testament makes it very clear that the men are to lead the acts of worship in assemblies of mixed sexes. In 1 Timothy 2:8, Paul instructs that “the men [andras – accusative plural of aner, thus males only pray in every place.” Obviously there is a special kind of praying under consideration; it is the leading of prayer that is in view!

Commenting upon this verse, a noted Greek scholar has well said, “The ministers of public prayer must be the men of the congregation, not the women” (Nicole 1956, 106).

Bengel says that Paul is “speaking of public prayers, in which the heart of the people follows close after the language of him who prays” (1877, 252).

Bloomfield notes that the expression “in every place” means “in every or any place [appropriate to public prayer]” (1837, 356).

Ellicott says the allusion of the passage “is clearly to public prayer; cf. verse 1. ‘The men’ is thus in antithesis to ‘the women,’ verse 9 . . . . the conducting of the public prayers more particularly belonged to the men” (1978, 48).

The foregoing observations could be multiplied many times over, and they stand in bold relief to the superficial reflections of the modern liberationists who would have us go beyond that which is written!

In 1 Timothy 2:12, Paul declares, “I permit not a woman to teach, nor to have dominion over a man, but to be in quietness.” The negative conjunction oude (nor) here is explanatory in force, revealing that the apostle is forbidding any teaching or similar activity in which a woman exercises authority over a man (cf. Lenski 1937, 563; Danker et al. 2000, 734). And it is obvious from the preceding context that he considers leading a public prayer as an act of authority over those who are thus led! It is, therefore, a serious error to advocate the idea that women may lead the worship in groups of mixed sexes. And we might add that the principle not only applies to formal worship services, such as those of the Lord’s Day, but also those semi-private “devotionals” wherein both men and women are jointly worshiping. The New Testament does not authorize a woman to lead a man in worship under any circumstance.

It is becoming increasingly fashionable to assert that the New Testament instruction, which limits the sphere of women’s leadership activity, is grounded in cultural peculiarities of first-century society, and so is not applicable today. Some appear to be suggesting, in fact, that if one does not have a PhD in Hebrew, Greek, and Roman cultural anthropology, there’s not much of the New Testament that he can understand.

How then can one know whether a New Testament teaching is age-lasting, or whether it is merely culturally oriented, hence, temporal? Here are some guidelines.

In the four major contexts where Paul discusses male and female relationships (1 Corinthians 11:2-16; 14: 33b-35; Ephesians 5:22-23; 1 Timothy 2:8-15), the principle of subjection and the application of that principle to specific situations (e.g., a woman not leading men in prayer), are based upon historical facts that go back to the very commencement of the human family. Thus it is not a culturally-oriented instruction.

When one begins to argue that the modern woman is not bound by 1 Timothy 2 (to limit her role in public activity), it is but a short step to denying that the wife is obligated to be in submission to her husband (Ephesians 5), for both contexts have the same historical heritage!